Serious Cycles was founded by Seth Lawrence In his parents basement in 1988. He was only 13 years old and had a passion for BMX racing and repairing bicycles. The opportunity started when his parents allowed him to purchase some tools and parts from a gentleman by the name of Lester Erikson (owner of Lakeside Cycle in Manomet).This was the beginning of a lifetime of involvement in the bicycling community.

The store name was derived from a conversation with his parents. During this conversation his father suggested "Serious Bicycles" then his mother said I've got it "Serious Cycles"! From that day forward the name has stuck. He then began to set up a small shop in the basement and started to sell and repair bicycles under the name Serious Cycles.

At the age of 18 he attended Quincy College for Business and decided there was nothing better than combining both his passion for cycling and business. So on April 1st 1995 Serious Cycles Retail location opened its doors for the first time. Over the next several decades Serious Cycles would expand 4 times making it one of the south shores largest bicycle stores.The store has now been open for 25 years and has seen it's fair share of competition come and go but remains to be the areas premier cycling store. 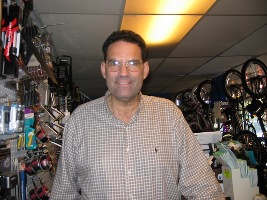 In Memory Of Glenn Lawrence (Dad)